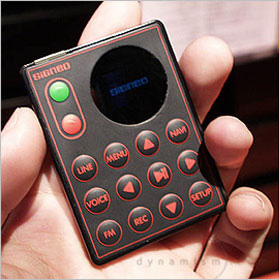 Not sure what you’re looking at? Neither were we. On closer inspection, we discovered that it was a digial audio player. Maybe it’s the size that got us. Maybe it’s the calculator-like looks. That must be it. It’s so retro.

It’s the Signeo SN-A800, and it plays MP3s, of course. It also records them. That’s right, you can use the built-in FM tuner to record your favorite radio shows as MP3s for future playback. You can even make like Wolfman Jack and produce your own voice intros.

This is a cool little—and we mean little— thing to have. Available in either black or white, each model has the showy red STOP and green GO buttons, and the other raised form and function buttons that make it easy to manipulate those tunes.

The only drawback that we could find—other than the fact that you might slip the SN-A800 into your pocket and sit on it by mistake—is the storage space. The top-level model, which goes for US$250, has just over 1GB of space. That’s not too bad, but it’s not great, either. The smaller model nets you 512MB for slightly less: US$180.

Still, for looks, form, and function, this is a smart (if tiny) choice.