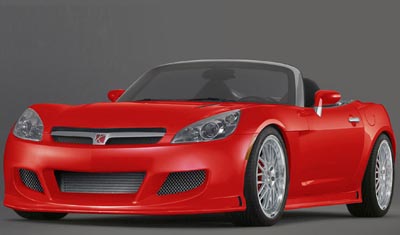 Like its sister car, the Pontiac Solstice, the Saturn Sky has been quite the popular affordably-priced roadster. Both cars are completely sold out, with waitlists longer than the eye can see. To stir up even more interest in the 2007 Saturn Sky, General Motors has teamed up with tuning firm Gravana and produced a 300 horsepower version of the hot convertible to be displayed at the upcoming SEMA show in Las Vegas.

SEMA, as I’m sure you already know, is considered the Mecca of tuner car shows for many people, not just for enthusiasts to show off their souped-up rides, but also for manufacturers — like GM — to showcase a few rad cars of their own.

The enhanced version of the Saturn Sky will come with two possible body kits to go with its rather substantial engine upgrade. Among the additions are a ground effects kit, full bumper body kit, carbon fiber engine cover, and a heat retractor hood. In the performance department, you’ll find a stainless air intake system, header, exhaust, coilovers, and sway bars.