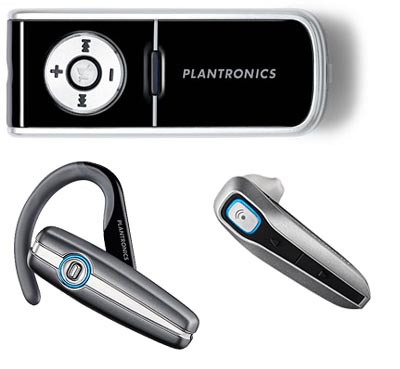 Plantronics is hoping to cover all the bases with the release of no fewer than four new Bluetooth devices for the fall. In true Plantronics fashion, they may not sport the flashiest looks, but they get the job done and (presumably) do it well.

For audiophiles, the Pulsar 260 is a “pod” that connects to your musicphone over Bluetooth A2DP to provide stereo audio. A set of wired earbuds, with an inline mic, connect to the Pulsar 260 itself, where you’ll find controls for track skipping and volume (which operate on the Audio/Video Remote Control Profile).

On the more entry-level end of things, Plantronics has the Bluetooth 1.1 Explorer 330. Rocking a conventional over-the-ear design, the $80 Explorer 330 gets eight hours of talk-time and 250 hours of standby.

A little further up the ladder is the $150 Discovery 655 with its in-ear design. Operating on Bluetooth 2.0, the 655 weighs in at 9 grams and incorporates a DSP chip for “crystal clear sound.” The 3.5 hours of talk time (80 hours standby) can get a boost from the optional AAA battery-powered charger.

Last but not least is the $140 Pulsar 590E, a foldable Bluetooth set that looks like a set of DJ headphones, except it comes with an “compact integrated mic boom”.

Look for the two Pulsars to drop in September, with the Discovery 655 and Explorer 330 bringing up the rear later in fall.