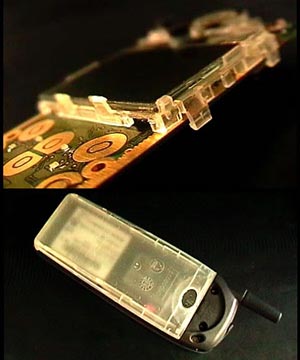 When this phone is hot, it just falls apart. That’s by design, of course.

Nokia has created a cellphone model with the device endgame in mind. When the phone gets to a certain temperature, it breaks into two large pieces, for easy disassembly and recycling of the battery, display, PWB, and other parts.

Nowadays, companies just squeeze the phones into tiny little pieces, without thought of leaking batteries or a host of other pollutants being released in the process. Nokia is aiming to change all that, at least with this model.

The company wants you to know that it takes an awful lot of heat to trigger this process. Leaving your phone on the dash with the windows up in the middle of summer won’t do the trick, although it might come close. Rather, the phone is designed to split apart when a centralized heat source like a laser is applied to it.