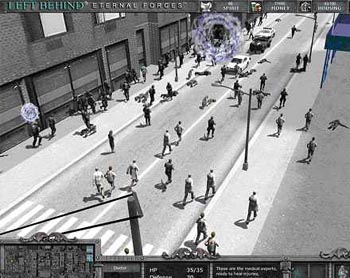 Ever since great titles like Spyhunter, some video games have had music that was as fun to listen to as the game was to play. A start-up game producer called Left Behind Games is betting that people will like the music in their games so much that they will want to own it.

When the company ships their new Eternal Forces video game in October, it will feature live links to the iTunes store where people can buy the songs they hear and the albums they come from. When you click the link the game is automatically paused, and it resumes once you have the music downloaded. Gamers can even customize the playlist like you can on the Xbox, and listen to the songs they download as they play. The game will initially be released for the PC, though a Mac version may follow.

This is another step on the road to increasing importance for music in games. Electronic Arts, for example, has their own music production group.