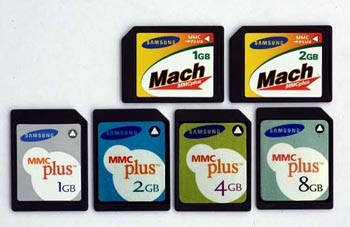 Samsung Electronics is making another claim to fame. It isn’t exactly a “world’s first” or “world’s thinnest”, but they can say that their new MMC memory cards are the industry’s highest density, bumping the benchmark up to 8 gigabytes. They managed to shove that much storage into such a small package by stacking their 8 gigabit (1GB) NAND flash memory solution. As a result, the highest capacity MMCplus card can stash up to 2000 MP3 music files or eight hours of DVD-quality video.

Not quite ready to jump into the realm of 8 gigabytes? No worries, because Samsung is also offering 1GB, 2GB, and 4GB flavours of the MMCplus cards, based on MLC (multi-level cell) technology.

If fast data retrieval is more of a priority for you, you may want to look into the performance-minded MMCplus Mach line, said to provide read speeds and write speeds of 40Mbytes/second and 25Mbytes/second, respectively. Available in 1GB and 2GB versions, the MMCplus Mach cards are based on SLC (single-level cell) NAND flash.

Look for both the high-density and high-performance MMCplus cards to start shipping before year’s end.