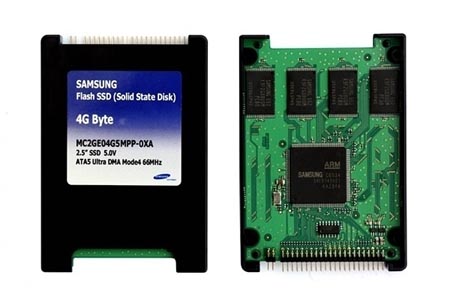 Just because you’re running on that awesome new operating system from Billy Gates and friends doesn’t mean you’re on top of the techie hill. After all, what are you doing still messing with that traditional hard drive and all those moving parts, draining your battery life like there’s no tomorrow?

Hop on the NAND flash train and look into the new 4GB solid state disk (SSD) from Samsung that will give your Vista-powered notebook or PC an added boost in performance. By using the “ReadyBoost” feature, Vista will “intelligently populate the SSD with the data a user needs before they ask for it.” In this way, switching users or opening programs is much speedier.

In a sense, Samsung’s SSD will serve to eliminate data seek delays, because it is able to handle up to 5000 requests per second (compared to the 100-200 that a HDD can handle). The “performance boosting” SSD can be placed anywhere on the motherboard through the ATA port, and through Vista’s automatic compression, the 4GB SSD would store the equivalent of 8GB of data.