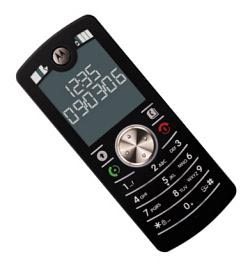 Yes, more news from Motorola. I know, I know, they’ve still got you reeling from those other four-letter announcements like the sliding RIZR, beefy KRZR, and the slim SLVR L7c, but they’re dropping another bomb on the market. Even skinnier than the SLVR at a mere 9mm of thickness, the MOTOFONE will apparently launch simultaneously in both CDMA and GSM flavours, the former being known as the F3c.

I’m wondering if they’re cannibalizing their own market by releasing a slim candybar alongside the SLVR, but skinny is what Motorola knows how to do, and based on the relative success of the RAZR and Q, I think they know what they’re doing.

On the spec sheet, the MOTOFONE features a ClearVision display with Electrophoretic Display (EPD) technology. This allows for a high-contrast screen that is easily visible even in the brightest of sunlight. They plan on keeping the price down to appeal to “early adopters” and “emerging markets”. As such, it only appears to have polyphonic ringtones with 8 voices for the GSM variant, 32 voices for the CDMA.

Both MOTOFONEs are expected to drop in Q4.