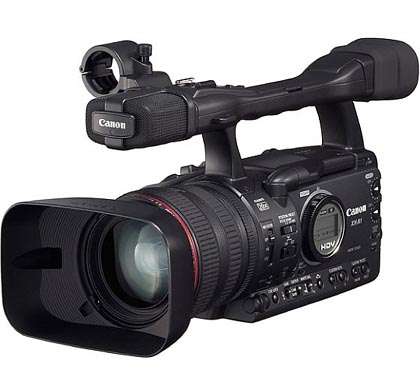 Despite what some people may say, I can’t get myself to associate the world “compact” with these two new HD camcorders from Canon — the XL G1 and XH A1 — because they are quite large, honking things. I guess compared to other pro-level movie takers in the market, these are relatively smaller, but they aren’t exactly “compact.”

If you’re in the market to be able to record videos in glorious 1080i resolution (1440×1080 pixels), then these more affordable choices from Canon might be right up your alley. In line with being on the cheaper side of things, these follow-ups to the XL H1 make use of MiniDVs, instead of recording straight onto a DVD or an integrated hard drive, a bit of a downer given the higher-end stuff associated with high definition.

Key features include a Fix “Video L lens” for 20x optical zoom, a 1/3 3CCD, and 1.67MP imaging sensor. The same DIGIC DV II image engine found in the XL H1 has been included in the XH G1 and XH A1. No word on pricing or availability.