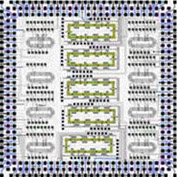 The holy grail of the transistor world is the chip that won’t fail. A group of researchers is aiming for that lofty goal in a quest announced this week in San Francisco.

Scientists from the National Science Foundation, the Semiconductor Research Corporation, and the University of Michigan are researching ways to create chips that will police their own flaws, finding ways to fix them with online collaboration software.

The ultimate goal is to design a chip that detects a problem, shifts the resources from that part of a chip to another one that is a-okay, fixes the damaged part of the chip, and then returns the resources to their normal duties. The result would be a chip that suffers no loss in performance power. Such a set of procedures would make for a slimmer semiconductor than what we have now, which is sometimes bloated with the redundancy needed to find and diagnose problems.

The project has funding for three years, but researchers won’t wait the entire 36 months to remind the public what they’re doing. Period publication of results is planned, perhaps even delivery of rudimentary products.