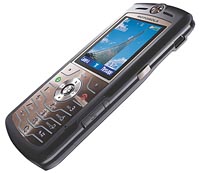 I thought we were through with all the Motorola announcements yesterday, but it seems like the big M has a few more tricks up its sleeve. Not content with unveiling the MOTORAZR MAXX, RIZR, and KRZR, they slipped in another couple of other handsets into the mix as well, including the CDMA-loving SLVR L7c.

Unlike when the RAZR first hit the market, CDMA aficionados don’t have to wait nearly as long for their version of Motorola’s super skinny candybar. There isn’t a heck of a lot of details available at this time surrounding the SLVR L7c, but you can expect the relationship to be similar to what you found with the RAZR V3c.

Based on the rumblings on the internet, the L7c will come ready to tackle high-speed data with 3G EV-DO, as well as a few standard features like a VGA camera, Bluetooth, and microSD expansion. The expectation is for a launch before the end of the year, though we’re still waiting on official word on that from our friends at Verizon, Sprint, Bell, and/or Telus.