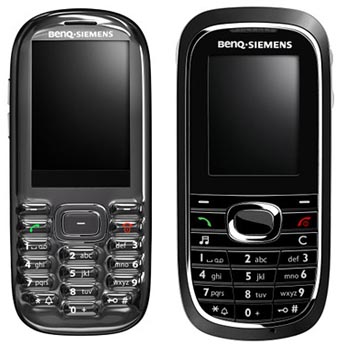 Not to be outdone by the people at Motorola and their large handful of announcements these past couple of days, BenQ-Siemens has announced a couple of new phones of their own. They aren’t exactly the most exciting designs – the new E71 and E81 look quite similar – but their rounded corners and smooth exterior will surely win a fan or two in the “clean look” category.

Said to be “inspired by water”, the BenQ-Siemens E71 comes with a special coating to minimize fingerprints (maybe Nintendo should have thought of that for their DS Lite, or Apple for their iPod Nano). Key features include a 1.3 megapixel camera with 5x digital zoom and a microSD expansion slot. Audiophiles will feel right at home with the integrated FM radio and MP3 player. No word on pricing, but the E71 – to be available in Dark Silver and Onyx Black – should hit shelves later this year.

For the business-minded user with a fun personality, BenQ-Siemens is hoping to have you covered with the E81. Like the E71, it’s got a curvy appearance, an MP3 player, and a 1.3 megapixel camera. Capable of shooting movies and making video calls, the E81 is naturally a 3G handset. Expect the BenQ-Siemens E81 to present itself to retailers in October at a yet to be determined price.