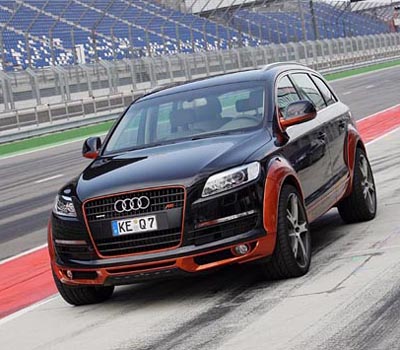 I’m not a big fan of the two-tone paint job they decided on, but I can’t argue against throwing in some extra juice under the hood. Abt Sportsline has outfitted an Audi Q7 with some go-fast modifications, as well as some aesthetic customization to let everyone on the road know that you aren’t cruising around in a garden variety sport utility. They call their creation the AS7.

The body kit itself is quite subtle, adding to the sport ute’s “already muscular appearance”, but when you throw orange on a black vehicle, it’s bound to catch a few glances. You’ll find plenty of that orange, from a trim ring around the front grille to new side skirts and fender flares. Grab the AS7 and you’ll be rolling on dubs, as it were, with one-piece 20-inch or 22-inch AR wheels.

Outside of the changes in the look department, they’ve also added some usable power. The run of the mill 3.0-liter diesel engine has been coaxed to produce an additional 39 horsepower, bumping that number up to a very healthy 272, not to mention a beefy 426 lbs-ft of torque.