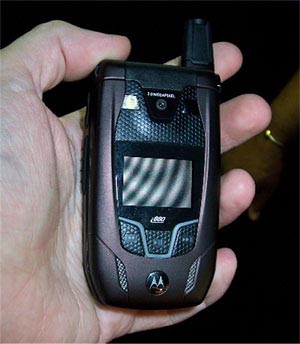 Granted, these new handsets are a little prettier than the rubber brick that I reviewed a couple days ago, but I don’t know who they’re trying to fool by calling them “fashionphones”. Motorola has just unveiled a couple of new iDEN phones destined for the Nextel lineup: the i880 and i885.

Like the i580, the i880 and i885 throw in some multimedia functionality into the mix with an integrated music player, but unlike the rubbery wonder, these new phones come with dedicated music buttons and a “push-to-open button on the hinge.” They aren’t quite as rugged, but they still do the popular push-to-talk (PTT) dance that everyone seems to love.

Another big feature found on both phones is the two-megapixel camera, though that isn’t something that is particularly exciting anymore, even around these parts. No word on pricing, but both the Motorola i880 and i885 should be hitting up a Nextel kiosk near you before year’s end.

I think that if I were looking for a new Moto phone, I’d be more interested in the RIZR, MOTORAZR MAXX, or KRZR anyways.