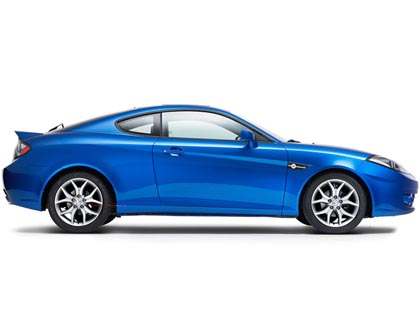 The spy shots have been slowing filtering through the internet the past couple of months, but now the Korean automaker has finally unveiled some official shots of their new entry-level sports car. Known simply as the “Coupe” overseas, the Hyundai Tiburon received a mild update for the 2007/2008 model years, cleaning up some of the lines and as a result — according to some, at least — providing for a more “timid” stance.

Personally, I think the new look, especially the profile, is reminiscent of the last-gen Toyota Celica (late 90s model). As much as I liked that look, what this means is that the design is fairly dated. In this way, the “redesign” is a little lacking, as most were hoping for a more radical change, rather than a minor change of the headlights and inclusion of Altezza-style tail lights.

The Asian and European launches should come a little later this year, with the North American release following shortly afterwards. Expect pricing to be much the same as the current Tiburon in the below-20k range.