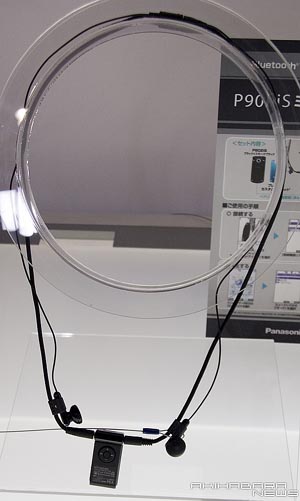 If you had to name some of the most popular features on contemporary cellular phones, you’d probably mention an integrated camera, a built-in music player, and the ability to eschew wires in favour of Bluetooth.

DoCoMo of Japan is aiming to address at least two of these needs, unveiling a new accessory to accompany their popular line of cell phones. This Bluetooth headset is designed with musicphones in mind, integrating the earbuds into the lanyard and getting the simple control unit to dangle from your neck like a pendant.

Although they’re saying that they’re taking the “OWN” approach, this isn’t exactly innovative. It’s all been done before and there doesn’t appear to be anything that sets this DoCoMo offering apart from the competition. The Bluetooth Audio Headset looks pretty standard, complete with a round d-pad for advancing tracks, changing the volume, and other simple functions. But hey, at least it’s wireless…. sort of.