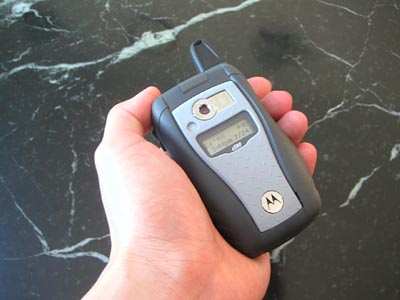 With the ongoing onslaught of music-centric handsets in slick, shiny casings, the Motorola i580 is quite different from the rest of the pack. Boasting military-grade resistance to water, dust, and shock, this is one rugged business-minded phone for users in less than ideal environments. I can envision a tough phone like this being deployed by site surveyors, military personnel, and construction workers. After all, a glossy iPod-esque mobile phone isn’t going to do you too much good if you’re battling out in the dusty deserts of Iraq or hammering out metal girders where there is a significant risk of damage (to yourself as well).

If you’re an urbanite or suburbanite looking for the trendiest new handset, the Motorola i580 — offered through Sprint Nextel, as well as being marketed as the i570 through Telus Mobility in Canada — is not for you. It’s a little on the bulky side, a little more on the heavy side, and the rubberized exterior isn’t going to help you win over any girls at your local nightclub.

Strangely though, this phone does come with a fair bit of multimedia functionality. The integrated 1.3 megapixel camera takes some pretty decent shots, all things considered, especially if you make use of the LED floodlight (which “pulses” when you take a picture). The camera comes with 4x digital zoom, picture size ranging from 176 x 220 (wallpaper) to 1280 x 1024 (max), self timer, and the ability to record videos (128 x 96 or 176 x 144) of up to 30 seconds in length.

The built-in media player tackles music and video files through the very bright (and I do mean bright) internal color display and twin speakers, with storage coming by way of the microSD expansion slot and the approximately 20MB of usable on-board memory. But of course, this isn’t designed to be a music phone. The i580 is a rugged handset to be used in the field by mobile professionals and not those who linger around downtown in a three piece suit or the kid down the block as he cruises on his skateboard. In the ruggedness category, I feel this phone is a success. I didn’t put it through too much stress for fear of actually damaging it, but based on my experience, it’s built pretty darn tough.

It appears that the OBEX Bluetooth profile is disabled in this unit though. When I tried transferring any photos, videos, or audio files via Bluetooth, either to or from the Motorola i580, I could “bond” with the other Bluetooth device without too much trouble, but the connection “fails” when I try to initiate the transfer. This was true when I tried to connect with a Motorola V600 and a Motorola V635, both of which have no trouble transferring files with each other. 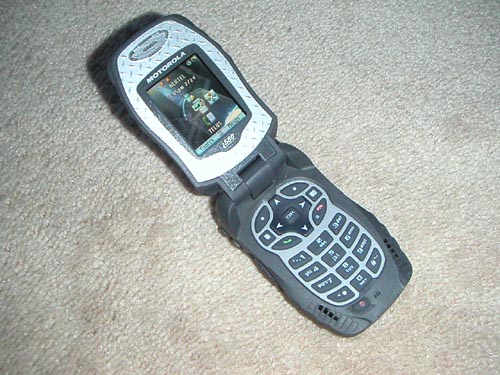 A few things about the user interface. It could be improved. Like a lot. Having the menu button to the side of the directional pad threw me off, especially considering that on the main screen, it shows the menu icon in between the functions of the two soft keys (i.e., in the middle, near the bottom). This gives me the impression that the menu button should be placed above the “up” arrow. The menu itself is quite cumbersome as well. Instead of being able to scroll to the next set of icons (it shows up to nine selections at a time, like Net, Java Apps, Settings, and Downloads, in a three-by-three grid), you have to push “More” (the left soft key) instead of simply pressing “down” a few times on the D-pad. I found this a little strange, especially when you switch to “list view”.

The main display, as I previously noted, is very bright, very colorful, and very vibrant. The resolution isn’t exactly the best, but it’s more than adequate for being able to communicate under the bright midday sun. The speakers, especially when used in tandem with the speakerphone function, are very loud. Again, great for functioning outdoors where there can be a lot of background noise. The external display is very basic, being monochrome only, lighting up a pale purplish-white and showing you pertinent information like signal strength, battery left, time and date.

The external controls are quite good for an iDEN push-to-talk device. The walkie-talkie button is, as you’d expect, large, rubbery, and on the left side of the phone, just below the two volume buttons. On the top of the phone are two rubbery buttons — one for the speaker and the other with a “stop” icon. You can use this to make phone calls without actually opening the clamshell. By pressing the “stop” button, you bring up your recent calls, scrolling using the volume buttons. Press the “speaker” button to make the call, which will automatically come through the speakerphone.

All in all, I wouldn’t say that I was disappointed with the Motorola i580, per se, but it just isn’t for me. The media functions are there, but cumbersome (or crippled); the menu is a little obscure and could use some cleaning up; the mobile web and email functions are okay, but can suffer from considerable lag (that’s probably due more to the network than the phone itself); the camera is quite good though.

The Motorola i580 is available now through Nextel for $430, with a $200 discount given to a new two-year service agreement.

Pros:
– Super rugged and waterproof. I think this phone can just about take anything on.
– External controls are easy to access, and provide extra functionality when the flip is closed.
– Very bright internal display
– Very loud speakers for calls, ringtones, etc.

Cons:
– Battery life. Under fairly light usage (including mobile MSN, web, etc.), I found I had to charge the phone every 2 days.
– Menu. It’s too cluttered and not exactly the most streamlined.
– Weight: Physically, it’s not that much bigger than some of the beefier clamshells on the market, but it is noticeably heavier.
– Crippled Bluetooth. It hurt not being able to freely transfer files between phones.