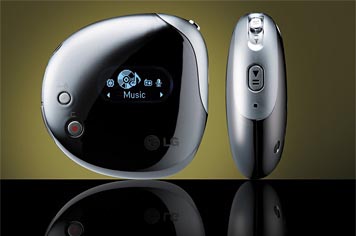 At this time, LG seems to be playing second fiddle to Samsung when it comes to the Korean world of cell phones, but they’re slowing creeping up on those sales figures thanks to a certain “sweet” handset. LG has taken the slick look of the Chocolate phone and transferred it over to the DAP market with the announcement of their new MFFM20 flash-based MP3 player.

Some may say that the form factor is eerily reminiscent of Rio; others may point out that the smooth surface coupled with an OLED display takes a page right out of Sony’s pebble-ish playboook; but don’t let that copycat-edness deter you from giving this music player a second glance.

Available in 512MB and 1GB flavours, the LG MFFM20 throws down 20 hours of battery life while showing the love for your PlaysForSure collection. No word on pricing, but we did catch word that it’s headed to Europe. A North American launch is still, as it were, up in the air.