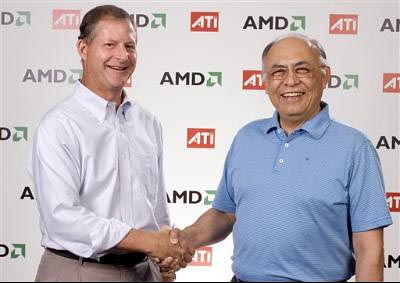 AMD didn’t stop at slashing prices on chips today, they also spent a pile of money to get bigger and more competitive. The second biggest chipmaker in the world behind Intel has announced their intention to buy graphic chip industry leader ATI Technologies for $5.4 billion. With the move, AMD instantly becomes one of the leading suppliers of graphic chips, and they become much more able to compete with, and maybe even surpass, bitter rival Intel.

The move also has a side benefit for AMD. Intel has been trying (unsuccessfully) to break into the consumer product fields like HDTVs and cell phones. ATI supplies those sectors, so AMD establishes a foothold their rival does not have.

AMD hopes the deal will support them in their continued efforts to steal market share from Intel. They have taken 5% from the Pentium and Centrino crew in recent years, and each percentage point equates to about $300 million in revenue. This deal, which should be approved by year’s end, will contribute in a small way to the bottom line of AMD in 2007, but the company anticipates a major boost in 2008.