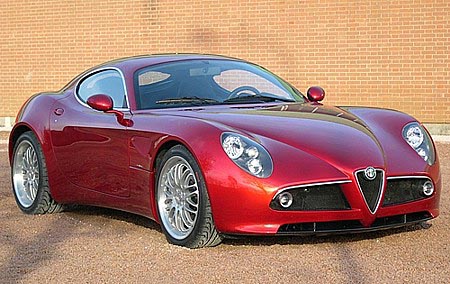 Although previous reports more or less confirmed that Alfa Romeo’s triumphant return to the American market would be sometime in late 2008, the exact vehicles involved have had a little change of heart. Instead of the more mainstream Brera, 159, and Spider, Alfa Romeo is going to re-introduce itself back to the U.S. with the 8c Competizione halo car, a high powered coupe a definitive high-end look.

Destined for U.S. Maserati dealerships in late 2008, the Alfa Romeo 8c Competizione coupe will get its power from a 4.2-liter V8 courtesy of Maserati, making it easier for the Maserati dealer network in the States to service the new cars. The convertible 8c Spider version will be following shortly after, sometime in 2009. About 500 of each model are being planned for American sales, half of the total 8c production run.

In this way, the American debuts of the Alfa Romeo 159, Brera, and Spider have been pumped a couple of years, with the new plan calling for a 2010-2011 launch for the more entry-level vehicles.