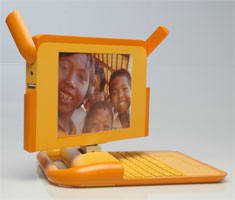 If you’re going to market laptops fto those who can’t afford them, you want that laptop and everything else associated with it to be as hassle-free as possible. The developers at the One Laptop per Child (OLPC) are keeping it the simple to the extreme by designing a human-powered energy source for these handy laptops.

One of the main obstacles for powering a computer in the first place is that many places in the world still don’t have electricity. The laptop project has solved that problem, they think, with a generator that can be powered by pulling a string. Users can either pull the string with one hand while holding the generator with the other (yes, it is that small) or they can clamp the generator to a desk and use leg power to make it go.

The technical specs on these new laptops include a 500MHz processor, 500MB of Flash memory, wireless broadband, and the capability to play and compose music, all on a 7.5-inch screen. In order to power that sort of computer, the user will need to generate the equivalent of 20 watts of power every 10 minutes. (That’s not a whole lot of effort, if you think about it. Tests have shown that even the smallest of hands can generate 10 watts easily and continuously.) The string-based generator is designed to be quiet and easy to use, not to mention not physically demanding, as the early hand crank design would have been.

These string-powered laptops should cost no more than US$100, its designers say, and will work using readily available string (shoestring, for example). A long-lasting battery system is on the drawing board as well.