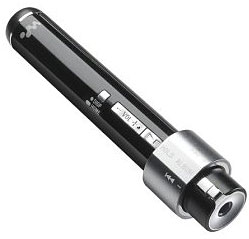 While some people may say that the Apple iPod is the be all and end all of portable music players, lest we forget that the whole “take your music with you” thing started with something called a Walkman. At least it did for me: I had a cassette-based Walkman, as well as a CD-playing Discman.

Sony hasn’t done as well as they had hoped in the MP3 player market, but they’re coming back with renewed vigour and an all new design. This redesigned “sports series” of flash-based network Walkmans is simple, smooth, and quite affordable.

The 1GB NW-S203F will only come in silver, whereas its companion, the 2GB NW-S205F comes dressed up in shiny black. Covered in metal, these new players are water resistant and come with a “collar knob” for navigation. With a built-in G-sensor pedometer, calorie counter, and stopwatch, these are clearly designed with sporty types in mind.

Other key features include an FM tuner, one-line OEL display, and 3 hours of life on a three minute charge (18 hours on a full charge). Look for the $120 NW-S203F and $150 NW-S205F to ship around September or October, but they are available for pre-order through Amazon now.