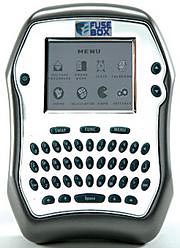 What do you get when you take a BlackBerry, remove all of its cellular radios, remove its voice calling capabilities and PIM software, and plunk in the ability to make use of WiFi hotspots? Here’s your answer: the “high-tech” Fuse Box for kids.

It can’t make phone calls, but it is perfectly capable of sending text messages given that it is within range of a WLAN hotspot. Venturing out onto the street or into the mall strips the child of his or her ability to stay connected, unless, of course, they’re sporting a Migo or Firefly as well.

There really isn’t much going on here other than the QWERTY keyboard. The Fuse Box even looks like it’s missing a color screen, opting for a monochrome display instead. Applications look appear to be few and far between, but hey, that’s what you get when it retails for a mere $70 with no monthly fees.