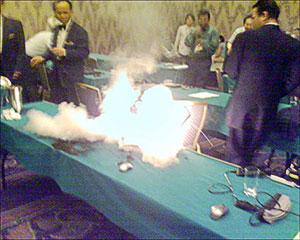 Dell made some headlines they would rather have avoided a while ago, when one of their laptops burst into flames in Japan. Now, according to a leaking source, it seems that this isn’t the only problem the company has had with extreme heat in their machines. As someone who has repeatedly BBQed my thighs with my Dell laptop, I have no problem believing this at all.

According to the source, Dell has “dozens” of incidents of overheating laptops recorded over a two year period. The reports include several machines with melted or charred casings. Not all of the damage appears near the battery, but all of the problems are in places that traditionally overheat.

On top of this report, there is news that another Dell notebook burst into flames, this time at a Novell facility in Utah. This one, though, didn’t have a Dell battery in it. A replacement had been purchased from a third party.