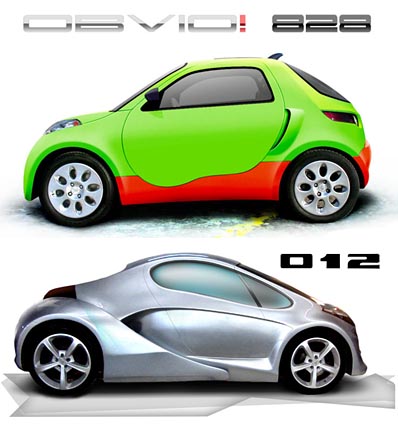 Don’t let their diminutive stature fool you, because these cars — although a little cramped — could offer some excellent value if they ever make their way into our showrooms. It seems that ZAP is working on importing the Brazilian-based OBVIO! mini cars to the United States, and they’re getting awfully close to actually doing it.

Production is set to start next year on the 828 and the 012, both of which come with engines that can run on either ethanol, gasoline, or some combination of the two. The standard Tritec 1.6L four banger only makes 115hp (but 149 lbs-ft of torque) when mated with a continuously variable transmission, achieving around 30mpg in the city and 40mpg on the highway. But, there’s an option on the 012 to throw in a 250hp power plant. Target prices are said to start at $14k and $28k for the 828 and 012, respectively.

There’s even news that they have full electric versions in the works designed to give the Tesla Roadster a run for its money. With a range of 200 to 240 miles, these EVs will do the 0-60 in less than 4.5 seconds. These are significantly more expensive, with the base model electric 828 going for $49,000, and the 012E selling for $59,000. Still cheaper than the Tesla.