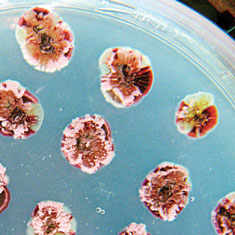 With the fragility of the world’s oil supply ever on the front burner in policy debates, ethanol is emerging as a prime substitute to straight-up petroleum. One of the best sources of this ethanol is expected to be biological in nature, that of agricultural waste.

Burning biomass produces far less carbon dioxide than burning gasoline. Biomass is also in much greater supply these days and is seemingly less expensive to produce. Moreover, countries like the U.S., which have huge amounts of land to draw from, conceivably will pay less for bio-induced ethanol made from resources on its own soil than it would for oil and gas spewing from wells and tankers owned by other countries.

Such mundane things as corn kernels, wheat and rice straw, paper pulp, and even plant leaves can be sources of cellulose that can be converted to ethanol, scientists say. At the cellular level, bacteria and other microbes can break down these products of nature and create ethanol as a result. The great thing about this, according to conservationists, is that these products are usually thought of as waste and are routinely discarded.

The one element of all this that has been turning heads in recent days and weeks is the use of genetically engineered fungi to jump-start the ethanol production process. Scientists are spending time and money to produce microbes that can help break down agricultural waste on a cellular level much more quickly and efficiently; the result is, so far, money chasing progress.

Existing technologies allow for such production, but the rate of that production is slow, much slower than scientists, conservationists, and gasoline giants want it to be. However, progress is being made in this area and many important people, including a handful of very powerful names in the U.S. Government, are behind the effort. (Witness a recent Department of Energy Department report reinforcing this commitment.) Companies are willing to front money for research facilities, because they think that the long-term result will be to their liking and kind to their shareholders’ bottom line as well.

Some of these efforts include manipulating microbes to do the heavy lifting on a microscopic level. Other scientists are pursuing genetic engineering of the most radical kind: creating whole new microorganisms that can be superproducers right out of the genetic box. Calling on research done by the Human Genome Project, these scientists are starting from scratch and aiming to invent an artificial chromosome that will blossom into a viable bacterium whose task-specific genetic pathways will allow it to do only what it has been designed to do.

Such powerhouse potential is raising hopes of a great lessening of dependence on foreign oil. That may very well be the case… in a decade or so.

For now, it is encouraging enough that such research is being allowed to take place and that the word ethanol is on the lips of many people conducting the oil consumption debate.

One thing to remember before we all get excited about all this ethanol production: It has the potential to be far more expensive to transport because it is water soluble. We have to truck all that ethanol from place to place. Perhaps the same scientists who are creating super-duty ethanol-producing microbes can invent some sort of pipe that prevents water from seeping in.