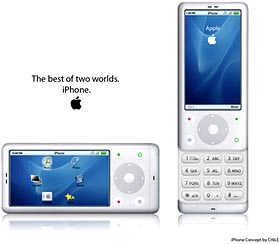 Here’s something fresh – an iPod rumor. This time, the speculation is that Apple is readying to dominate Christmas with the timely release of the much ballyhooed but as yet non-existent iPod phone.

The mystery item is also thought to be a converged treat, since it is rumored to also have Wi-Fi capabilities. This way, users aren’t tied to their computer if they want to download new tunes or share songs with friends (taking a page out of the MusicGremlin, or more recently, the Microsoft Zune).

This most recent, but not unique, speculation come from a British newspaper via ‘computer insiders’, and lacks any specific details which would make us certain that this will happen. It would make sense, but so would any one of a dozen other moves that the company is rumored to be poised to make. As with every rumor, Apple has refused to comment on the speculation, so all we have left to do is sit back and wait. And talk about all of the latest rumors, of course.

Note: The accompanying picture, courtesy of 21talks.com, is for illustrative purposes only.