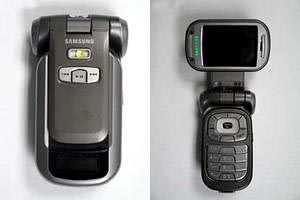 Okay, so we don’t really get to do much of the T-DMB dance over here in North America, but that didn’t prevent the suits from the FCC from giving the go-ahead to the Samsung SPH-M250. The somewhat rugged, somewhat bulky-looking clamshell really shows that it means business. Flip open the phone and you’ll discover that you can rotate the display 90 degrees for landscape mode, you know, how videos are meant to be watched anyways.

Bearing a striking resemblance to the B250 T-DMB released in Korea some time back, the M250 will be picked up by Sprint over in our parts at a price that has not yet been released. Interestingly, the FCC only gave the go ahead to use this new Samsung phone on the 1900 MHz band, so if you’re stuck in a concrete jungle, service may be a little lacking.

The best predictions going around are saying that the Samsung M250’s launch will coincide with a new live TV service from Sprint, though we haven’t received confirmation one way or the other.