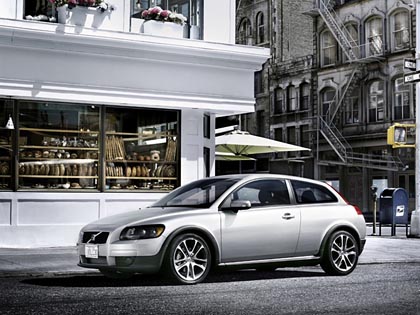 Entry-level, gas-sipping hatchbacks have been all the rage in Europe for several years, but it has only been recently that the trend has migrated over to North America, perhaps spurred on by incessantly rising oil prices. For the latest hot hatch, we turn to Sweden for the 2007 Volvo C30. The carmaker has now released official images of the vehicle, a production model of the one we first saw back in January at the Detroit Auto Show.

The interior of this three-door hatch appears quite sporty with two-tone bucket seats and a three-spoke steering wheel, while the outside aims to find the delicate balance between soft refinement and a harder, edgier feel.

Although no official details were released to accompany the pictures, most industry pundits are expecting that the C30 hatchback will come with similar, if not identical, engine options as the S40 sedan and V50 wagon lines. It shouldn’t be long before we get confirmation on that front, though, as well as the all important pricing information.