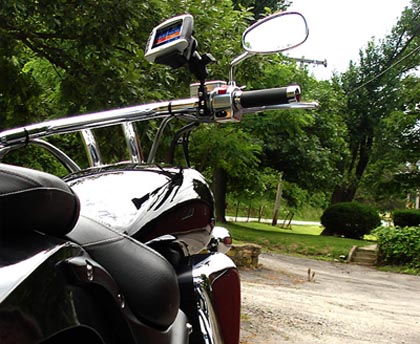 Garmin is well respected in the industry as among the leaders in mobile GPS navigation. We’ve seen a literal onslaught of products from the company, produced primarily for use in cars and trucks, but with summer in full swing, a lot of us are itching to go two wheeling on our bikes. Just because you’re riding a crotch rocket doesn’t mean you should get lost though, so along comes Garmin with their all new zumo, touted as “the Ultimate in Motorcycle Navigation.”

To be unveiled at this week’s MotoGP U.S. Grand Prix at California’s Laguna Seca Raceway, the Garmin zumo features a glove-friendly design and left-handed controls. The bright 3.5-inch touchscreen display is waterproof, and the Bluetooth “hands-free-to-helmet” functionality is an added bonus.

Designed “by motorcyclists for motorcyclists”, the Garmin zumo navigation unit comes complete with all the software and maps you’ll need, including an option for real-time traffic information. Moreover, it’ll get a GPS signal even in “urban canyons”, and provide about three hours of use on a full charge of the removable lithium-ion battery. Expect an official launch in October with prices around $1,075.