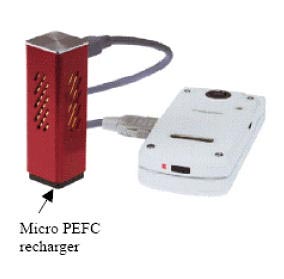 Water can do everything these days. A few weeks ago we heard how it can fuel our cars, and now it can charge your phone too. NTT DoCoMo of Japan is testing a prototype of a micro polymer electrolyte fuel cell (PEFC) that they have developed with an oddly named company called Aquafairy.

Unlike an earlier, much bigger fuel cell that DoCoMo developed that needed methanol to function, this cell just needs the safer, cheaper and easier-to-find water. Using the liquid of life, the charger creates 800mAh at 3.6V, which is enough to recharge your phone as quickly as if it were plugged into the wall.

The new unit is being shown off at Wireless Japan 2006 this week, and the plan is to produce it by next year. That’s in Japan of course, so it’s hard to tell if we will ever see it anywhere else.