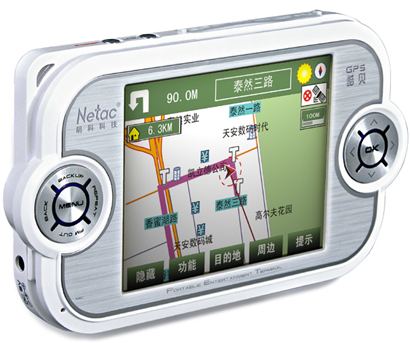 It used to be that if you brought a portable GPS device with a touchscreen interface, that was enough to turn a few heads. Maybe you’d throw in some real time traffic information to set yourself even further apart from the crowd. Then, they started including media playback functionality, because just knowing how to get to your destination isn’t enough; you want to be entertained while doing it.

The latest entry in the GPS-PMP combo unit arena comes by way of Chinese electronics maker Netac, in the form of the P210, a full-featured gizmo with plenty of functionality. The 16.67 million-color display is 3.5-inches, as of course it’s a touchscreen. Navigating your way through China is a breeze thanks to the preloaded maps, but they’ve neglected to include Taiwan (which is still technically part of China, but this isn’t a political blog, so I’ll just leave it at that).

On the PMP side, you’ll discover MP3 and video playback, an integrated FM transmitter, eBook support, and love for “millions” of Zuiku games, whatever those are.