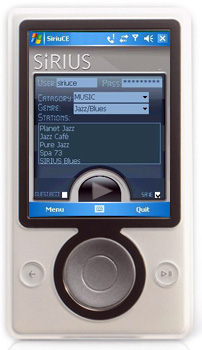 It’s amazing how much is starting to pop up about this reported “iPod killer” from Billy Gates and friends over at Microsoft, given that the company hasn’t even made any kind of formal announcement about the thing. When we first caught word of this project, we were told that it was codenamed “Argo”. Since then, we’ve learned that it is Project Zune, though that may not be the final name for the product.

More news has popped up about the Microsoft Zune, and not only about its outward appearance, but also some of the bits and bytes to be found under its skin. For starters, the best guess has Microsoft releasing 30GB and 60GB varieties of the player, and it is more or less common consensus that the Zune will feature WiFi (for wireless downloads) and satellite radio, though we’re not sure whether Microsoft has (or will) sign a deal with XM or Sirius. Also under the hood is a 400 MHz processor.

These aren’t confirmed yet, of course, but they are well within the realm of reason. Stay tuned for more as it develops, including price and launch dates.