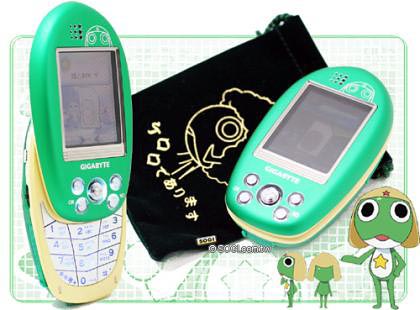 Just because you’re a kid doesn’t mean that you should be completely left out of the more techie side of cell phones. We’ve already seen the jump into offering mobile phones to the school aged set, in the form of the lacklustre Migo and Firefly, but Gigabyte is set to unleash an all new children’s phone onto the Japanese market, one that features more functionality, and, oh yes, a frog.

The Gigabyte Keroro phone for kids is based on Keroro Gunso, a Japanese manga and anime that tells the story of Earth being invaded by a race of extraterrestrial frogs. I’ve been told that over in these parts, the series may be a little better known as Sgt. Frog.

In any case, this slider phone actually has some pretty decent features, given its child-oriented nature. There’s an on-board camera, 128MB of memory, and full keypad to make calls, unlike the Firefly and Migo that only have speed dials.

To get your ribbit on, you’ll need to hop over to Japan and do it quickly, because Gigabyte is only producing about 2,000 of these Keroro phones.