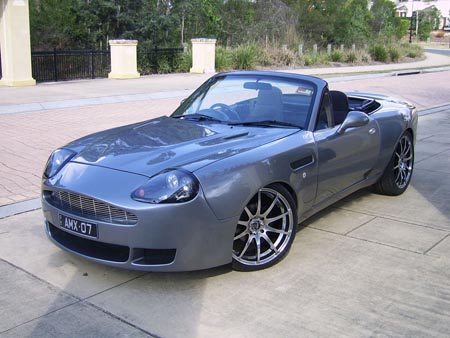 What do you do when you want a crazy British sportscar but with the bulletproof reliability of certain Japanese engineering? Simple: plaster a kit on the outside that hides what the car really is on the inside. That’s exactly what Custom Automotive Restyling of Australia did to an otherwise mild-mannered Mazda MX-5 Miata when they transformed it into an Aston Martin.

As far as I can tell, the changes are purely aesthetic, leaving the actual mechanical doo-hickeys as they were when they came out of the factory. Michael Lebedev, a fitness instructor, is the owner of the vehicle with the $7500 (Aussie dollars) body kit. The completely unique roadster, dubbed the AMX-07, even won the “Dare to be Different” award at a local tuner show.

This is almost as impressive as shoving a Nissan engine into a vintage Ford, but of course, that was just a movie. This is for real. Well, as real as an appearance-changing body kit can be.