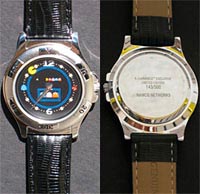 Kids just entering the video game arena these days probably never came across an arcade cabinet sporting Galaga iconography or anything of that sort, being far too caught up in the latest Halo shooter or chasing down hookers in Grand Theft Auto. Gamers who grew up in the 80s, however, are quick to point out that titles from that era were easily the most addictive, albeit not the prettiest.

Want to show your dedication to retro gaming and that yellow circle with an insatiable appetite? Look no further than the limited edition Pac-Man watch from Club Namco.

They’re limited production at a mere 500 units, so expect that they’ll be gobbled up faster than a fleeing blue ghost… speaking of which, Inky, Pinky, and Clyde are featured on the face of the watch, right in their trademark “home base.” Pac-Man makes his way around the perimeter, ticking away the seconds.

It’s not exactly cheap at $130, but the Pac-Man watch undeniably appeals to the gaming geek in all of us.