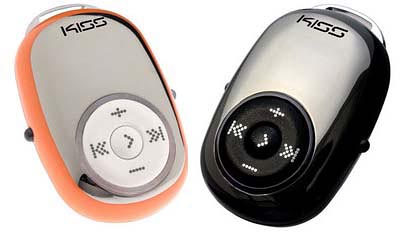 I don’t see how something like this could compete in the same market as a bunch of similarly-small MP4 players on the Hong Kong market, given that the KS 2000 lacks a display altogether, let alone being able to blast out vids with the best of them. Then again, just look at this thing: the KS 2000 (aka Kiss 2000) is one gosh darn cute MP3 player. Too bad it’s about as basic as it gets.

As previously mentioned, it lacks any sort of display, so you won’t be able to sort out playlists or even know what song you’re listening to (unless you recognize it yourself, of course). That said, there is an integrated FM radio, a voice recorder, and USB 2.0.