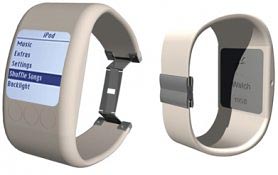 Don’t you go rushing out to your friendly neighbourhood electronics store just yet, because this handy little invention is still in the concept stage. Designed by Peter Burns, the iWatch is exactly what you’d expect it to be: it’s a wristwatch with all the music-playing capabilities (and menus) you’ve grown to know and love from the Apple iPod. The only thing it’s missing is the click wheel.

No need to worry about extra cords getting in the way, because the iWatch is supposed to make use of Bluetooth-enabled earphones. The current revision has the iWatch sporting 10 gigabytes of memory, but it wouldn’t be completely far fetched to throw in some form of expansion (though Stevie Jobs himself hasn’t done that yet).

If the iWatch really does become a reality, it could help with that in-grown fear about iPod theft. After all, no one would be the wiser: it’s just a watch. Then again, the Bluetooth headphones could be a dead giveaway that you have something of value.