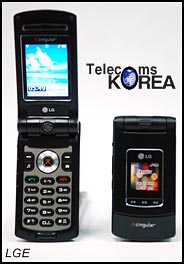 Verizon might be getting a big slice of LG Chocolate pie, but the team over at Cingular isn’t going to be left completely in the dark. The service provider known for its squishy orange mascot is picking up some 3.5G goodness from Korea’s second largest cell phone maker. The LG-CU500 clamshell takes advantage of Cingular’s HSDPA high-speed network, with rates up to 1.8Mbps.

Samsung may be leading the charge with world’s thinnest this and world’s skinniest that, but LG is aiming to “lead the after-3G market”, being the first handset maker to introduce an HSDPA mobile phone in North America. If you can’t latch onto the HSDPA network, the CU500 will still let you take advantage of standard EDGE and WCDMA as well.