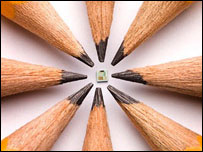 Hewlett-Packard is aiming to take the lead in memory chips yet again. The company has released a prototype of a chip the size of a grain of rice that can store 512KB of data, or up to 100 pages of text. Moreover, the data is stored wirelessly and can be streamed at speeds up to 10 megabits a second. For those keeping score at home, that’s much faster than Bluetooth or RFID.

Officially, it’s being called the Memory Spot chip for now, after the HP team that developed it. A couple years from now, when the chip hits the open market in large numbers, it will likely have a cooler-sounding name.

This chip is small, yes, but it has relatively little memory space on it. Why would you want one? Well, the data transfer speed is a selling point. Also, this prototype level of just 512KB will likely be improved on by the time the chip is officially released. Also, common uses for this chip are expected to be drug identification, logging of patient data in hospitals, and even adding sound and video to greeting cards or postcards.

This kind of chip is attractive to the manufacturer as well, because all of its parts can be made as one, keeping costs low. HP has said that it could probably manufacture these chips, in mass production, for as little as a dollar each.

Interestingly, a similar story popped up, except it’s saying that Freescale is developing an incredibly tiny alternative to Flash memory. Like the HP Memory Spot, Magneto-resistive RAM (MRAM) too stores 512KB of data, is being aimed at RFID applications, and is using a fast transfer rate as a primary selling point. It seems that neither company is acknowledging the other, so either these are directly competing technologies, or they’re one and the same and they’re both trying to pawn it off as original. We can’t say for sure.