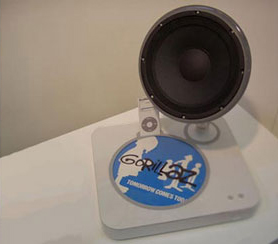 Nostalgic for the album art that you’re not seeing on your iPod? Michael Kennedy has the answer for you.

Kennedy is an English designer, and he has recently unveiled the I-Deck (not to be confused with the i-Deck), a dock for your iPod that harkens to the days of yore when vinyl ruled the world and music enthusiasts bandied about terms like “45” and “B-side.”

Just plunk that modern MP3 player into the dock and you’re off on a trip down memory lane (or at least a glimpse of how music used to be played). The rather retro-looking tabletop is actually a touchscreen LCD, which allows you to sift through the thousands of digital songs on your iPod. The album art shines through on the turntable-lookalike.

Now if we could only find a dog that would sit there and look at the whole thing.