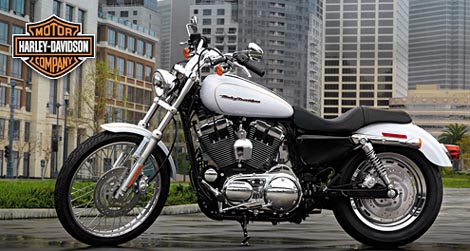 For cruising at its purest and a leather-clad biker gang look, you can’t go wrong with a Harley. The motorcycle maker is set to release no fewer than four new models in 2007, as well as the Twin Cam 96, an all new-version of the Big Twin engine.

The Twin Cam 96 gets mated with the 6-speed Cruise Drive transmission, and will be providing the power for three of Harley’s motorcycle lines: the Dyna, Softail and Touring. The engine is “integral not only to the performance of the motorcycle, but also to its styling, to its sound, and to the way it feels to the rider.” This new engine will provide up to 17% more torque and, paired with a new muffler, will offer a “more commanding exhaust tone.”

Among the new models to be introduced are the VRSCDX Night Rod Special with a menacing, blacked-out styling, the classic chopper-esque FXSTC Softail Custom with Bobtail rear fender, the limited-edition 50th Anniversary Sportster with a traditional peanut fuel tank, and the reworked FLSTF Fatboy with a 200mm rear tire.