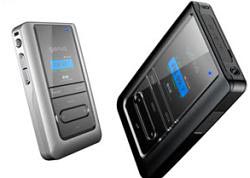 Sometimes you want to just grab the radio hits out of the air and listen to whatever they happen to be offering at the time. Other times, you want to bob your head to your own personal collection. The new Genus SLM lets you do both, picking up DAB radio tunes with the best of them, but also allowing for standard MP3 playback.

There doesn’t appear to be any internal memory for you to store your batch of Lil Jon crunk, but there is an SD expansion slot, providing for as much storage space as you’re willing to pony up (there’s no mention of a cap, but there might be one in place). Available in either silver or black, the SLM isn’t exactly innovative in its design, but it’s not ugly either.