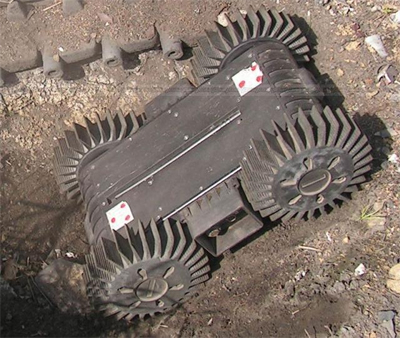 Check this out: a ground robot that has four-wheel drive, and that’s just the beginning.

It’s called the Spybot 4WD, and its made by MacroSwiss. Making a a name for itself at the recent European Land Robot Trials, the main new feature of the bot was its Flapper Wheels, which are a sort of cross between motocross tires and paddle wheels found on an old riverboat. These Flapper Wheels gave the skybot its power and manueverability and made it the star of the show.

At the recent trials, which took place at an army base in Germany, the Spybot 4WD showed its top running speed of 10 kilometers an hour, its staying power of up to four hours without a battery recharge, and its ability to climb 45-degree slopes, navigate waterways and muddy fields, as well as being able even to land on its feet after being thrown 10 meters into the air. All the while, the bot streamed video from two hi-res cameras back to mission control.

And lest you think that you could just run onto the field of robot battle and steal this little guy, which you could conceivably carry, it boasts a weapons capability that is more than enough to defend itself.