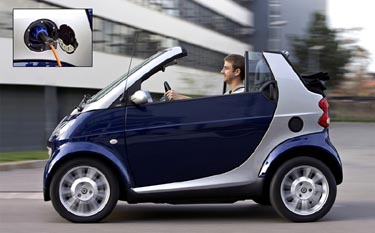 Smart cars are already known for their fuel efficiency, but the latest offering from DaimlerChrysler will burn much less gas. None, in fact. The company has announced that they will be building an all-electric version of the Smart Fortwo.

The Fortwo EV, as it is known, is said to perform better in key city-driving tests than its gas-powered equivalent . The EV can shoot from 0-30 mph in 6.5 seconds, before topping out at 75 mph, more than respectable for the consumer electric vehicle sector.

The almost laughably tiny cars will have a market test in Britain initially, with the Fortwo EV being leased to corporate clients. If that goes well, its availability will likely expand. The gas-powered Smart is set to make its U.S. debut in 2008, but it isn’t yet known if the electric version will join them at that time.