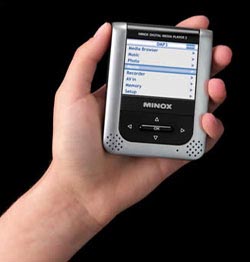 Media players seem to be a dime a dozen these days, with just about everyone (with the exception of a certain produce-named company) releasing a fairly entry-level gadget that not only tackles the standard MP3 fare, but also a number of photo and video formats as well. Minox spends most of its time in the camera world, but they’ve jumped into the portable media player realm with the DMP-3, the successor to the DMP-2 and DMP-1.

The Volkswagen-designed device throws down a 2.5-inch LCD display and what appears to be an iPod-like user interface sans a click wheel. It appears to only take MP3s on the audio front, but it can double as a digital photo album and portable video viewer. Built-in memory is rather anemic at 128MB, so you’ll need to make use of the SD expansion slot for any kind of real storage.

We’re still waiting on an official announcement regarding a launch date and price, but our best estimates have it in the $200 range.