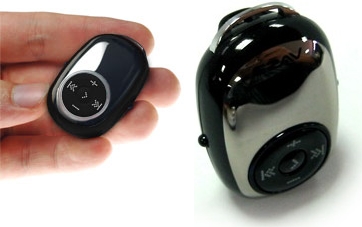 We first heard about the EZAV EMP-700 portable music player late last year when they were still pushing it around the marketplace as the “Pebble”. While the form factor was certainly extra cutesy-wootsy and may have appealed to a certain segment of the DAP-buying public, I guess it didn’t do as well as they were hoping. Thus, instead of upping the ante in functionality, Datasafe simply changed the name to a neologism: Oomi.

It appears that every else remains much the same. It still plays MP3s with the best of them, as well as PlaysForSure WMA files stored on its 2 gigabytes of on-board memory. The claimed 12 hours of battery life isn’t exactly industry leading, but it should last long enough for your daily commute. Other extras include a voice recorder and FM radio.

Made in China, this Korean gadget (confusing, I know) tips the scales at 0.7 ounces and will put you back about £70 or $130 American.