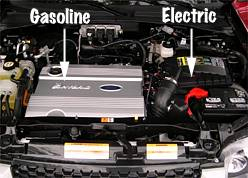 GM and Daimler Chrysler are said to be pouring money into ways to add hybrid technology to traditionally gas-guzzling SUVs. Can Ford be far behind?

Sales of the larger vehicles are flagging and have been doing so for some time. All of the hybrid news of late has been at the extremes of small cars and larger vehicles like buses and taxis. In the middle are the gas-hogs, the six-passenger, off-road variety vehicles that work well for taking the whole family on a Jeep-road ride to the lake but also take a big bite out of the wallet when it’s time to fill up. As of yet, you can count on one hand the number of SUVs sporting hybrid engines.

Yet if you can have your SUV and your hybrid, too, wouldn’t you just pay the extra money and get the electric number? After all, the “two-mode” technology promises better performance in addition to better gas mileage.

The hybrid additive solves one problem, that of consuming less gasoline to begin with; but it doesn’t solve the overall problem of cutting the emissions and other debris left behind by those taking off on off-road journeys. More than anything else these days, people use their giant SUVs to do pedestrian things like go to the supermarket and pick up the kids from soccer practice. All of those urban trips take their toll on the urban atmosphere, which is already close to suffering overload.

Still, sales of SUVs are down but are not going away. Something has to be done. On the theory that the world’s petroleum reserves will eventually be exhausted, the two monster auto manufacturers are embracing future tech up the line, including vehicles that are marketed as sport utility. Ford, for its part, is pursuing ethanol options, which may or may not be comparable to the hybrid intentions of its two main U.S. competitors. Henry Ford’s company does have a few hybrids but lacks a full line of SUV offerings.

Whether the hybrid option will catch on with SUV buyers is anyone’s guess.