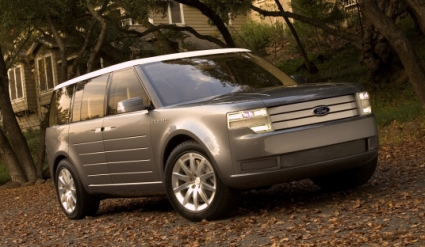 Although we only first heard about the Ford Fairlane not that long ago, with several pictures popping up last month in preparation for the British Motor Show, the Detroit-based car maker has already gone on the record and said that its un-minivan concept is definitely planned for production for 2008. Of course, we already heard “insiders” tell the Detroit News last month that the Fairlane was a go.

Set to replace the Monterey and Freestar minivans, this crossover vehicle receives a full three rows of seating and an outward appearance that, if you squint just enough, looks a little like an oversized Mini Cooper. Much of the interior and exterior styling are still up for alterations, so don’t expect the version to be unveiled at the British Motor Show to be the final production model.

Word is that Ford is working on two versions of the Fairlane concept: a more “regular Joe” one to fall under the Ford banner and possibly an upper scale model that will sport Lincoln badges. Production is being planned for the Oakville, Ontario plant.