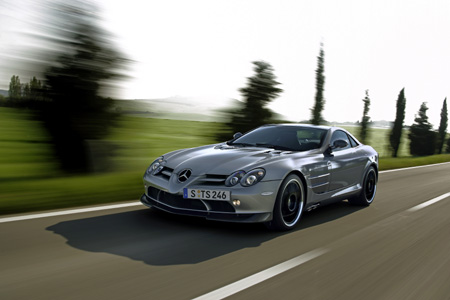 While a standard issue Mercedes SLR is usually enough to turn a few heads, the German automaker is set to up the ante with a modified version of the supercoupe. This new rendition, dubbed the SLR 722, pays homage to the vehicle that won the 1955 Mille Miglia. Stirling Moss and Denis Jenkinson’s 300 SLR, tagged with start number 722, captured the prize at the famed race.

For this new sportscar, they’ve reworked the suspension for a stiffer, sportier ride, so don’t expect it to ride like a country cruiser. They’ve bumped the power to an incredible 650 horsepower, and helped the car’s aerodynamics by reshaping the front air dam and rear diffuser. Styling cues include black wheels and red “722” badging.

Not a full out race car, the interior is far from being gutted. Instead, you’ll find carbon fiber, leather, and alcantara for the classy, upscale look.

The Mercedes-Benz SLR 722 Edition is available for sale as of tomorrow at a price that if you have to ask, you probably can’t afford.